The brief: In this exercise you will concentrate on conveying form by exploring tonal  values. Set up your model’s pose with a light source casting clear shadows and highlights. If you use directional lamps you may need more than one to combat the problem of hard outlines around shadows. For a tonal study it’s best to work in natural light.

Due to the times I work and the days, all seven of them could only do this exercise in the night time. So to try and combat the hard outlines as it instructed in the brief I left all the lights on. Including the bathroom which adjoins the living room.

Before starting this exercise I cut two almost square sheets of thick card the shape of the card influenced the poses in the following sketches and the final piece as I wanted to fill as much of the surface of each one up as possible. I painted one of the pieces of card with an opaque coat of Burnt Umber and the other with naples grey.

The first tonal sketch was very week, I had drawn better tonal studies in the first figure drawing exercise, Drawing the Human Figure. A week first drawing is getting to be a habit with me, it .takes a couple of drawings for me and the model to relax. Everything is in proportion though so it seems like I am improving as I go along.

The second sketch also in charcoal was much better, although there are hard outlines in places, particularly under the thigh. Again proportions are good and a lot of the tones are really nice but looking back on this pose as with all the poses I could have draped cloth over her or even a towel as I had secured the only sheet of cloth I had as a backdrop to stop the light reflecting off the white wall.

The second pose was drawn quicker and smoother than the first pose, the speed was down to the position of the model. Giving her her I-phone took her mind off any aching for the duration of the drawing. I think.

One of my deepest regrets so far of this course is overlooking the potential of this third tonal study in pencil. The angle, proportions, muscle tone and features were all spot on. There were hard outlines on the legs and arms but I could have overcome this in the final painting. Instead I opted for two different poses to turn into paintings. 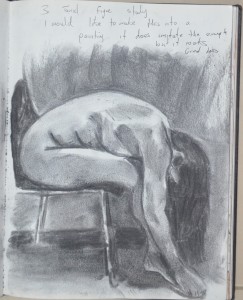 This next pose like the previous drawing in pencil was influenced by the painting by the Painting ‘Curled Nude on a stool’ by Euan Uglow that was shown as an example in this section of the course material, which I really liked and being flexible I know she would be able to hold this pose as long as I needed to draw it.

In this pose I included the chair and some background, The course material said a tonal figure in space. Did I go to far. Again, as with the first two poses I drew this in charcoal which was easy to blend to remove any hard outlines, but there are still some hard outlines on shoulders, beneath  the elbow and on the hip but there were heavy shadows here. I decided to take this one further and work from this sketch for a painting as I wanted to see how painting from the charcoal sketch would turn out.

Drawing with a light mix on Burnt Umber

Working from the charcoal sketch I began to draw the figure and build up tone with a lighter mix of white and burnt umber to attempt to build up the tone on the painting. At this point I realised it was not going to be a pure tonal painting and was already planning the next painting. 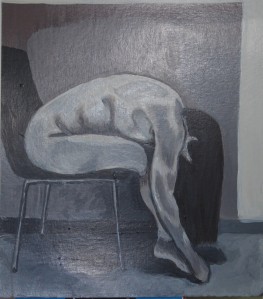 Using mixtures of Burnt Umber, white and black I began to imitate the charcoal study while trying to do away with any hard outlines some of which I chose to paint in at first probably down to insecurity. What I should have done was just slowly continue to build up the tone from the mid-tones something that I would do in the next painting.

I am happy with the final painting but as an experiment rather than as a tonal study. There are some very hard outlines which were almost unavoidable due to the darkness of the shadows and trying to get rid of these which I did try but wasn’t satisfied with the results.

This was a sketch for the Drawing the human figure exercise of one pose that I was particularly happy with and wanted to come back to for this exercise as I thought it would be really great for a tonal painting for this exercise. The one problem was proportions were slightly out and I had no girlfriend around or a photo of this pose for reference so I would be working solely from this sketch and using knowledge that I acquired in the drawing course such as central axis and that the head fits into the body roughly about 3 and a half times from the crown of the head to the bottom on a seated figure.

I started this painting trying to picture Edgar Degas’s nudes in my mind’s eye but not using any particular one as a reference.

Working on the board I prepared with the mix of Naples Grey I used a very light mix of Naples Grey and Burnt Umber to paint in the figure starting at the crown of the head then working down to the bottom and then back up the leg and finally painting n the arms knees feet and face. I like to have the shape of the face completed to some degree so that I can use the entire head as a reference for the measurement of the rest of the body.

Once I was happy with the shape and proportions I began to build up the tone in the neck shoulders and back as well as the tops of the arms this gave me an idea of the tones and mixes of paint I would be using. A certain ratio of these two paints can look ginger and that was something I wanted to avoid.

The soft tones were quite difficult to achieve and it take quite a while to complete, slowly layering the paint using more of a scrumbling technique than anything else with a small detail brush.

I was reluctant to add in the shadow as I was worried it would look like she was having a pee so I really had to play with that, and I did mess up. This resulted in me painting the whole floor in a dark mix of the two paints and then going over that with the Naples Grey and shaping the shadow from there hence the floor looking a different tone.

My thoughts on the final painting

There differences between the painting and the primary sketch such as the length of the neck, length of the arms and also a longer more curved back but I think I don’t think anything looks out of proportion. However, this was a tonal exercise and I think I did well with the tones in the final painting. There are some parts that look flat but overall I think it works well.

My Thoughts on this Exercise

Although I am very happy with the finished piece I could have gone about the whole exercise differently using  cloth draped over the figure and maybe other props. It would have also probably have been nice to do some standing poses especially from the back as she does have some nice back muscles but I can come back to this.

I have been invited by my girlfriend to her yoga classes to do some studies there but so far I haven’t had the time but this did inspire me to look on the internet for some interesting naked yoga poses. 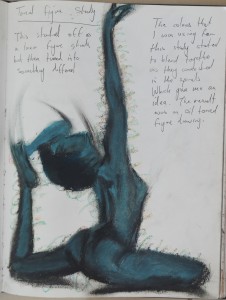 This drawing was originally going to be a linear study in oil pastel but then realized the potential of the colours I was using and so I went onto smudge the colours together with very interesting results.

I wanted to do more experimenting with these colours and chose another interesting pose to try to create what I had done the result was slightly different but still very interesting.

The following drawings were of models on the life drawing site Pixelovely.com. 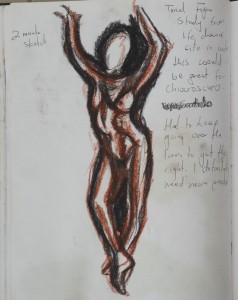 This sketch is really starting to grow on me, being an Egon Schiele fan it does remind me of some of the scrawny sketchy figures in his paintings.