For this exercise I was to set up a still life with flowers that could remain in place for a day or two, keep the arrangement simple. Notice the outlines between things – Negative shapes – and try to create interesting and varied spaces and interesting intervals between the objects in my arrangement.

Due to the shopping mall where I work being shut down for refurbishing I was a bit stumped on where I could find some flowers for this exercise but while having a stroll around my apartment complex looking for interesting flora to make a flower arrangement I came across a white flower with a yellow centre growing on a tree in the grounds of the next apartment which I know know to be a type of Plumeria called Frangipani so I went out when it was dark with a pair of scissors and clipped a few off.

When I got them back to the room I realised they weren’t enough by themselves so I went out and found another flower, Heliconia that when closed reminded me of a crab claw to add to the arrangement, These in a vase together with my christening silver and placemats that we brought back from England with us were all I needed to make an interesting composition.

Subjects used in the composition:

By using the subjects I chose was to set up a fresh and simple narrative of flowers with breakfast.

Working in my small 1 bedroom flat I am limited to where I set up a composition and what I set it up on as I don’t have many shelves or units. I chose to set the objects down on a black chair which gave me a black background. I played with the subjects trying them in different positions and looking at them from different angles but there seemed to be only 1 composition and one angle from which this still life would work from and for me the first charcoal sketch confirmed this for me.

I wanted the silverware to look bold not delicate, and at the angle that I chose with the light illuminating the composition from the right hand side the eggcup looked goblet-like and the serviette ring almost regal. I deliberately placed the eggcup at an egg-cup’s distance away from the vase with the serviette ring between them both to create the most interesting negative shapes. 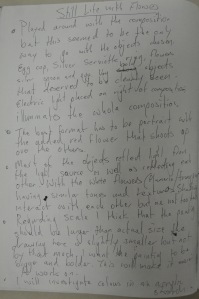 I had painted my assignment piece in landscape so for this one I really wanted to paint in portrait, adding the Heliconia behind the Frangipani meant that I could paint the eggcup and the vase on a large scale in portrait format while making the best use of the paper in this format.

Because I was using a black background but wanted to paint a fresh-looking still life I placed the light source very close to the composition facing down from the right, this gave me less shadows with light bouncing off everything.

There are certain colours that I associate with breakfast, light blue, salmon pink, yellow and light green and this composition seemed to have all of them but I wasn’t sure how the black background would affect the outcome. Thinking about the yellow-orange in the flowers and what I would describe as pink-orange tones of the egg I felt that a primary coat of light blue under the black would bring those colours out, making them a lot brighter. I tried this out in a quick acrylic sketch of the composition and I felt that the result was a positive one. 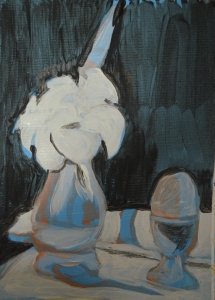 From the quick acrylic sketch I managed to put together a list of colours which I used in the quick sketch and I stayed true to this in the finished piece. These were:

I thought about painting this on a small scale as that would have probably helped to develop my painting skills more but after working on the acrylic sketch I decided that it would be better to paint a larger than life piece so that I could capture all the detail.

Like the acrylic sketch I began the final piece by drawing in acrylic paint rather than pencil as I used to do before the Drawing in Paint exercise. It did take a bit of reworking but not much. This final piece took me about four days to complete starting with the flowers as I knew they wouldn’t last me long as they started dying as soon as I removed them from the tree, this was a wise decision as the rest of the painting with the reflected light took the longest time to paint.

I worked mostly with large brushes, painting thick layers this helped me too loosen up as I have so far been too worried about getting my paintings to look exactly like the subjects that I am painting, to me this looks more like an impressionist still life and that was the look that I was going for.