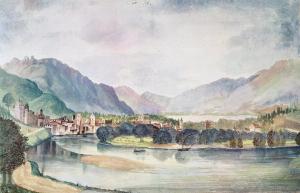 Albrecht Durer’s View of Trente, 1494 (watercolour with gouache on paper) is a good example of aerial perspective. Unlike some of his other paintings the fade out of the mountains in the background is a bit More subtle. Being up by the Meekong River examining this painting was helpful as it is  relevant to the scenes that I was sketching.

These two sketches were part of a series of sketches that I made up in Chiang Khong and one of three charcoal sketches drawn by the Meekong river on the border of Laos and Thailand. This one here show a lot of promise, I especially like the way the trees accidentally turned out to look like two dogs playing but there isn’t much of a fade out in the mountains in the background, which would be better for this exercise.

This sketch, although drawn on the same morning and not long after the last one one looks a bit more mysterious, probably because the way I drew the mountains in the background makes it look misty. This was the main reason why I chose to develop this for the final painting. I was hopefully that the photos that I took while I was up there would help me with the colours of the trees and the sky as there were no photos taken of this actual area.

Like the finished piece in the Hard or Soft Landscape exercise I finished this one up in back in my apartment in Bangkok. After the first sitting it started to look very different to the sketch. The horizon was the same height and I couldn’t quite put my finger on why it looked different, not realising that it was because the trees and mountains on the left weren’t as deep.

This wasn’t a problem for me and it actually .gave the scene more height and distance so I continued to let it take on a life of it’s own. 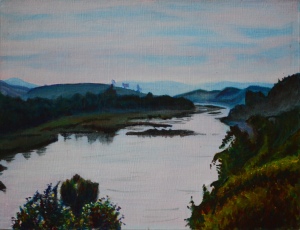 By the time I got the sky and the detail of the trees painted, it began to look even better than I expected. Painting thin washes of blue and white at the bottom of the trees helped me to depict mist on both sides of the river and I used the same scrumbling technique as I did in the Hard or Soft Landscape painting for the sky. Painting the clowds horizontally looked like they were (I think) lifting up in layers from the mist in the distance.

I’m not sure if I did a good job painting the mangroves in the foreground and I did go a bit wild with the solitary tree bottom right but the idea was to give them a lot of colour compared to the mountains and trees fading out in the background.

When I think of think of linear perspective in an urban landscape I think of Canaletto and his paintings of Venice and his wonderful interpretations of the canal systems and architecture.

They used to call Bangkok the Venice of Southeast Asia due to the network of canals  in and around the city, most of which have been closed off and made into open sewers. One of these canals is situated behind the Temple school where I teach and so to start this exercise I did  rather lengthy study of the canal and the buildings around it, 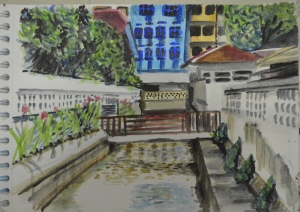 This was the first and probably the best study in this exercise completed from life and in one sitting. I put it together in pieces like a jigsaw drawing the main lines and filling in the details one part at a time rather than drawing the lines of the whole thing first. The plants, bridge  and the outhouse at the end of the canal give the painting a lot of depth and it is very much a finished watercolour painting. It would have also been good to paint using really thin washes of acrylic using them as a watercolour medium something I haven’t tried yet. 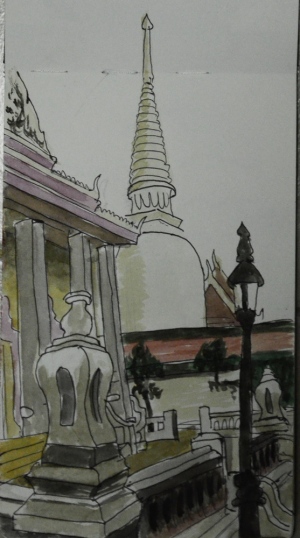 Continuing with watercolour I went onto make this sketch over two pages in my Moleskine sketchbook of Wat Makut Temple at lunchtime.

This time I completed the expressive outline in Rotring drawing pen before ‘colouring in’ in watercolour. Usually on this style of urban sketching I would lock the sketch in first in pencil before going over in pen but this time I hgave up on the pencil after a couple of lines and completed the rest in pen making it a bit more expressive.

It wasn’t bad and is probably something I would like to develop in the future. However, it would have been better if I had used the book length ways capturing a cropped version scene of both sides of the temple as there are nice buildings on all sides here.

I loooked all over Koh larn Island for a place where I could sit down undisturbed and spend time sketching without being bothered or being burnt to a crisp. It turned out that the best spot to sketch for this exercise was right near our hotel/guest house where there was a small passage way in between a resort and some traditional Thai island houses that lead down to the beach. 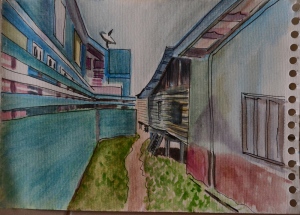 4 Koh Lan in Pen and Watercolour

Here I managed to sit under the corner of a canopy and look down the passageway from the road. The first sketch I made was in charcoal pencil, the second in pen and watercolour. The reason for the two sketches was to see how similar the perspective of the two quick sketches would be, if there weren’t that much difference then I would look at developing these into a painting with the information I had.

I started by drawing in the outline by dipping the handle end of the paint brush in a slightly watered down mix of primary blue, hopefully this gave me the same kind of control as drawing with a stick, nice and stiff but not too precise. 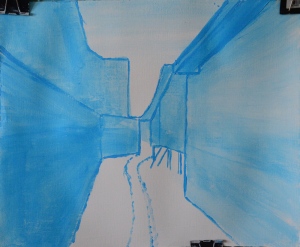 From there I applied a thin watered down mix of watered down blue fading into the white of the support for the sky and then began to apply thin washes of blue for the buildings.

The brief for this exercise said that ‘the use of line by drawing with a brush or a drawing medium will be more important than your use of colour and tonal contrast’ but I wanted to use this opportunity to practice a new technique. I don’t know what it’s called or if there’s a name for it but I worked in the paint on the wall of the building in a criss-cross motion working the thin layers of red, blue and burnt Umber on top of each other.

After painting the grass and the sand I carried  on working on the lines of the side of the shop and the wooden panels of the Thai houses with a small flat brush before moving onto the resort side of the passageway and the most difficult part, the wooden fence above the wall. 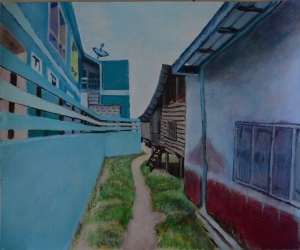 The two sides of the passageway depict a contrast between the traditional lifestyle that the Thais lead and holiday island lifestyle of the visiting holidaymakers and travellers and I was hoping to show that clearly here.

The finished painting is not how I imagined it would turn out. The perspective is good but I imagined it looser and more fluid rather than tight and precise like it turned out. This was due to the left hand side of the painting being quite technical and I would have probably been better choosing a street or passageway with Thai houses on both sides as I like the way the wood on the Thai houses turned out.

The wall on the building on the right remind me of the early paintings of contemporary artist Therdkiat Wangwatcharakul who paints on rusty old aluminium panels, the difference being my finished painting is a bit too clean. Maybe this is because the wall on the right is too clean, would it be better to mark it up in someway?