Look at some paintings of figures in interiors from different periods and choose two or three pictures that particularly appeal to you. At least one of these should be from the twentieth or twenty-first century. Consider what you think the artists’ intentions are and look at the technical and creative solutions that they’ve brought to the subject.

The relationship between the figures in David Hockney’s paintings are not exactly clear as he separates them leaving you the name of the painting to work this out for yourself.  His subjects especially in his 1970’s paintings were often wealthy, and in Paintings such as Mr and Mrs. Clark and Percy (left) you do get the impression that they are wealthy professionals of some sort. 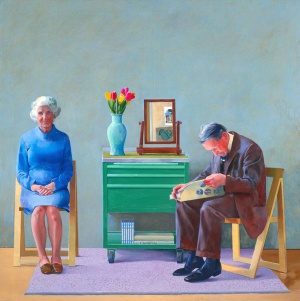 Linear perspective plays a big part in Hockney’s paintings. The subjects in his more familiar figures in interior paintings were often set in front of a flat back wall with a mat, table or chair painted in perspective to add depth to the painting. As well is this he also painted open doors or a view through a window to create depth.

When you look at the painting card players left you can see that he knew others were also aware of the linear perspective to his paintings. Here he reverses it adding a little confusion for the viewer.

Edward hopper’s paintings portray the loneliness of life in America at that time, a big country that like Thailand probably had a lot of folk from the country to the city for work, where they knew no one. To get this loneliness across he painted lonely figures in almost empty apartments using cold colours to depict bare walls and it worked.

While browsing through hundreds of paintings for this research pint I came across this Armenian artist who’s approach to painting this subject has really opened my my mind up. Vadim Zanginian paints with wild, wide brushstrokes that don’t allow you to focus on the interior behind the model even though you are well aware of it and the furniture in the room.

A similar technique can be seen here in John Singer Sargent’s painting ‘The Model: Interior with Standing Figure’. This is probably one of the most beautiful paintings I have come across this year. At first glance I saw a wonderfully clear figure standing in front of a sketchy background with beautiful tones as I enlarged it I could see it was almost a tonal study, painted quite quickly or so it seems but very effective. 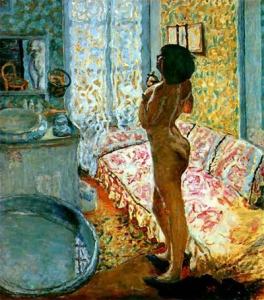 In the painting ‘Pierre Bonnard – Model in Backlight’ (left). The foreground and the model are solid but as you move towards the background the swirls of colour separated  by white spaces force you to see light shining through a window or patio door covered by a net curtain.