The brief for this exercise was to:

Set my model in a comfortable position, sitting or lying down making sure there is sufficient light both on the subject and the working surface.

The Head length is generally 1/7 of the full length of a standing figure, this can be used to measure proportions…Look at the shapes or outlines surrounding the figure which will help to locate the figure in space.

Use any drawing medium to mark out the principle shapes in your sketchbook…Make several sketches, working quickly each time and adjusting measurements as you progress…Move around the figure trying out different angles.

Throughout the Drawing figures part of the Drawing 1 Course I took advantage of the fact that my girlfriend is a yoga teacher and it was no different in this exercise. Asking her to hold positions that were quite difficult so there were often breaks mid drawing.

The first pose in pencil wasn’t the easiest for me or the model but it was an extremely quick drawing. This was down to being able to draw large parts of the figure in one continuous line such as the head back bottom under the thigh. It was also a very easy pose to position in my sketchbook.

The second drawing was in charcoal and was a seated pose so it gave my model a break for a few minutes. Working with this medium it didn’t take long to get the drawing anatomically correct but then again I have had a lot of practise drawing the same model.

The benefit of this pose is being able to use the shapes within the figure to get the measurements right. The face bares no resemblance at all but I’m not too bothered at this stage it was the outline and negative space that I was concentrating on.

The third pose in ballpoint pen was inspired by Gustav Klimt’s Goldfish which is probably one of my favourite Klimt paintings. Again this was quite a quick pose but quite awkward so we had to take a break mid pose. It is a nice pose to sketch but probably one I would not choose to paint due to the length of time it would take in a very uncomfortable position.

The back muscles look nice especially the prominent muscles at either side of the spine are wonderful to draw but the bottom is not defined this is due to my girlfriend, like most Thais, not having a prominent bottom. 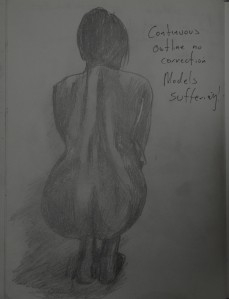 Drawing in pencil this time I managed to give her what she wished for, a large bum.

The next pose was probably the most difficult for her too hold so I did the drawing in stages. My chosen medium for this drawing was oil pastel. I drew the outline very quickly with a neutral colour and did my best to mark out folds of skin and shadow before taking a break. This allowed me to build up colour and tone without having to look at the model all the time and she wasn’t having to stay long in the position for the second sitting while I corrected  some outlines.

Parts of the drawing do look incorrect and she looks fatter in the drawing than she actually is but rather than keep working on it I decided to move on to the next. 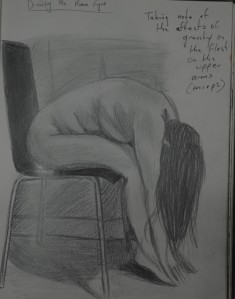 The next pose was a lot nicer and even though it looks quite technical was very easy to draw with the actual figure taking me not much more than a couple of minutes to draw. This time I decided. to add the chair and some background.

7 Another Drawing in Oil Pastel

From there I went back to the oil pastel with a pose that was also very quick and easy to draw this time from the front with the model slightly more upright. As I was drawing from the front, the shapes on the left and right arm and leg were almost symmetrical which saved some time so I managed to add a bit of colour and tone without having to take a break.

I really like this pose due as her breasts and shoulders have a really nice shape, I will probably come back to paint something similar later. 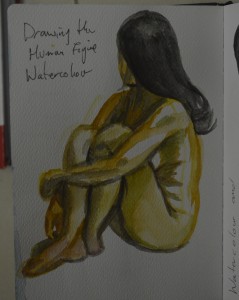 On the whole I think I did quite well on this exercise and tried out different drawing mediums rather than just charcoal. I know I was told to focus on outline but I wanted to a bit further.