The brief for this exercise was to create a simple narrative, involving one or two human figures and produce a painting that gives the viewer the clearest idea of what is happening.

I came across a photograph of a monk reading a book and praying in a temple in Ayutthaya which gave me an idea for this painting and also ideas for how I would go about depicting the stone wall inside the temple. To avoid plagiarism I would adapt the scene to my own painting in myself as the monk and also adding a twist to what was going on. I wasn’t sure of how it would turn out but I was focused on what I wanted the end painting to look like the problem was getting there was to be very time consuming. 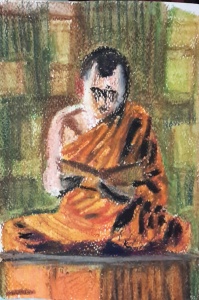 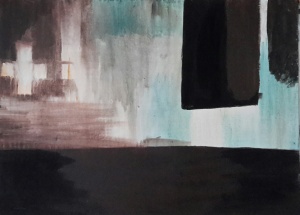 From there I continued to examine the photo to figure out which painting techniques I would use to complete the surroundings. I decided on a dripping technique to start with which would hopefully help me to depict the water stains on the ancient stone walls. As I stated in my previous post I begun this exercise before the ‘A Figure in an Interior’ exercise and so like most of the other exercises I completed it on backing board. I only wish I had painted it on a canvas panel to see how this technique would have turned out on a canvas support. 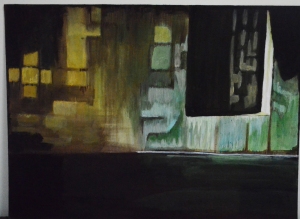 After first using the dripping technique I begun to define the stones themselves. These were very irregular with all different colours, shade and patterns so I wasn’t to worried about doing a brilliant job. When finished it did look like the wall was catching light shining through a window somewhere but the source wasn’t clear it was the figure in the painting that would help determine where that light source came from. I then went on to do some figure studies… 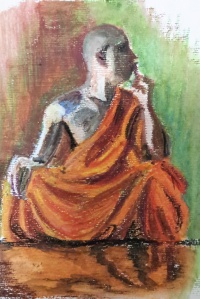 With my camera mounted on a newly purchased but cheap tripod I set the camera up on remote and started to snap photographs of myself sat in my best attempt at the lotus position and the orange monk cloth, that I have used as a prop in a lot of previous exercises during the last two courses, draped over my left shoulder.

I already new I was going to paint something in the window to the right of the painting and so I positioned a lamp to the left (my right) and faced in direction of the window in all of the photographs, making simple gestures with my left hand.

Looking back at the these three drawings, which to me were really great studies, especially the ‘Shhhh!’ pose in figure 4. I didn’t really need to paint anything else apart from one of these very suggestive figures which had ample information to complete this exercise.

The water soluble oil pastels gave the drawings a really oily effect, which I loved and so I shall be working on larger paintings from these studies, hopefully in oils in some future project.

Painting in the Figures 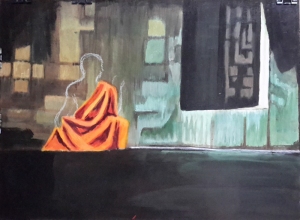 7 – Painting in The Robes

After choosing one of the studies to work from, the pose with the pointing figure, I began to paint the figure onto the larger painting. So I wouldn’t mess up the already painted background I drew in the figure in the same oil pastels which could be removed by my battery eraser if I made any mistakes. I was to find out that I could actually paint over any section of the wall if I needed to with a thin mix of paint in thin vertical strokes to keep up with the effect of the water stains.

With the  basic outline drawn out I began to paint in the robes using a medium paste mixed in with the paint to make them stand out more, then I started to paint in the figure. By this time I was having doubts to how the painting would turn out, the pose I had chosen looked quite weak but I carried on nonetheless.

9 – Painting in the Shadows

After painting in most of the figure I began to work on the shadow and other objects in the painting. Firstly I began to paint as though the floor was a mirror forgetting about distortions that would be caused by the ancient wooden floor. By this time I had already deleted the photo so I couldn’t copy it making the painting quite hard to paint I decided on painting the shadows by puling the brush down in a slight zig zag motion. 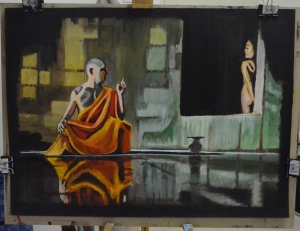 10 – Painting in the Second Figure

Once I had most of the reflections painted I set about painting in the second figure. At first I though about painting myself hising in the shadows with a lasso around the vase on floor attempting to pinch it, Then I thought about just a pair of evil eyes in the darkness but after another photo shoot with the girlfriend I decided on painting her standing in the shadows to depict the fight with the temptation that all men of the cloth in all religions must go through.

A this stage I realised the pose I had put myself in as the monk in the painting was just too weak and so resorting to looking athe photos I had taken earlier and the studies to see which would be a better pose I put together a mixture several poses.

Unfortunately then I had to spend a lot of time changing the reflections on the floor to suit the seated figure.

The finished painting was very time consuming. over a month with working 7 days and I still think that it is not really a finished piece but more of a study to something that I can can work on later.

My regrets are not working on the solo figures in the study rather than this larger scene as the solo figures were much stronger. The figures in the final piece seem weak, it was a great idea but it needed a lot more time to finish, this maybe something I will continue with but at this time I had to tell myself enough is enough so I can finish this course in time for submission. 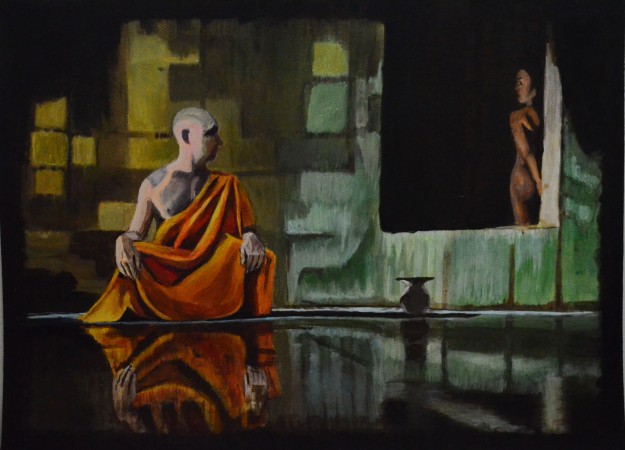