The character that I wanted to show for this exercise was a grinning or smiling self portrait, the closest I had come to a smile until now was a small quick portrait that I did in my small sketchbook that I lost a few months ago. Luckily I took a picture of it (left). Yet, even in this picture you can see that it was pretty difficult to crack a smile and it’s only really a half smile, it’s the eyes in the picture that adds the character to it as I have left more white in the eyes to make them look bulging. 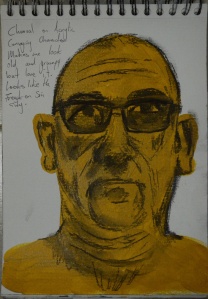 So in this exercise I attempted to capture some character again drawing myself in the mirror which I wasn’t that successful at.

Even though I liked the first study, charcoal on acrylic, a great deal I did look really grumpy, like a sad ‘Yellow Bastard’ the character from Sin City. I really like the effect that drawing with charcoal over the Yellow Ochre acrylic created but I don’t think I will ever again draw myself with glasses on as they add 20 years to me plus they are very difficult to paint.

Cracking a Smile in Crylic

In the next study I think actually did manage to crack a smile but working that fast I also managed to make myself look 20 years older.

Knowing I could smile better than this I decided to take a series of photos and browsed through them to see which ones I could use as a basis for this exercise, as I thought working from a photo would probably be my best bet. 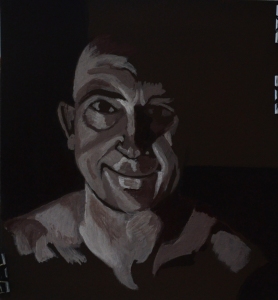 In one of the photos the smile was almost  a grin as I was really forcing it, I found this very appealing and wanted to over-accentuate this.

Firstly, I painted a background of Raw Umber and then thick brushstrokes of Raw Umber and White with both a flat and pointed paint brush to build up the shape of the face and shoulders. Then when it started coming together I painted around the shape of my face and shoulders with mix of raw Umber and black. Leaving the square to the right in the original tone. This was wear the moonlight came into the bedroom through the curtains but I wasn’t sure I would paint them in yet. In fact I could have actually left it here because it looked quite good as it did in all the stages of this painting. 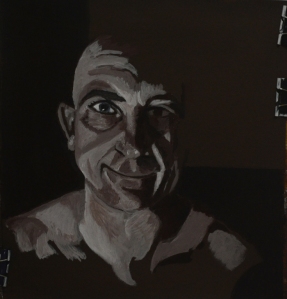 From here I worked on the eyes, painting them in in a blue-turquoise colour. Almost the complimentary colour of the Raw Umber and white mix. Adding the eye detail made me look a bit more sinister and so I decided to carry on although I wasn’t sure where I was heading at this stage.

Painting in the Curtains

After building up the light and shadow on the face and creating quite strong tones I decided to paint in the curtains in a white/turquoise mix keeping to the complimentary colours and this worked really well. I wasn’t sure whether to keep it as it was here with a bit of an unfinished look as it did look quite well but with a weakness for finishing a painting I continued to paint in the chest and shoulders. 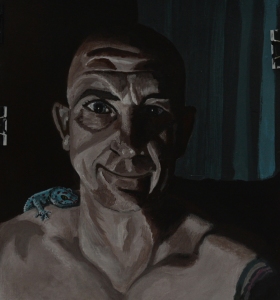 This was where the OCD kicked in. With  the turquoise curtains behind me to the right and turquoise on the tattoo on my right (left) arm I felt like there needed to be something on the left to balance it up.

Frida Kahlo had her monkeys and I had geckos scurrying around everywhere reminding me everyday for 16 years that I was far away from home, so what better than to paint one of these little buggers perched on my shoulder with the same here to here grin.

I looked for photos of Tokay Geckos on an image search and found one in the perfect pose. Tokay geckos here are usually turquoise and red and so I found a gecko in the right pose to go onto my shoulder and changed the colours and added the right amount of shadow.

The gecko on the shoulder added more character to the painting and actually looked like it could have been sitting there while I was painting or at least taking the photo.

My thoughts on this project 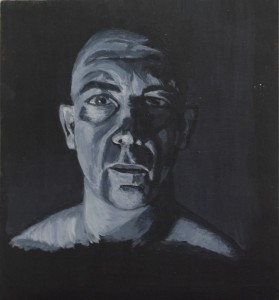 I feel I let myself down here. Although the second attempt at the self portrait turned out, I think, really well, I really need a lot more practice at this. My hopes were to create a self portrait at an angle and then eventually add props such as an easel, paint brush, etc. In the end I ended up painting the way I felt comfortable when I should have been pushing myself more and doing more experimenting.

I do like this and I continued to experiment through the exercise with the things that I had learnt through the course, especially with use of colour.

I think the background could have been better, maybe more natural with cloud formations or even a lighter colour such as cream to make the tones more subtle.

I was very spontaneous with this painting but to me it just looks too organised. I think this all comes back round to my weakness of wanting to create a finished piece. This is an habit that I really have to break.

The painting that I am most happy with here is the final piece in this last exercise, I really do think it is my best painting so far. Although I worked from a photo kit captured how I felt while I was painting it rather than how I looked in the photo, if that makes sense,