Do your own research point into the evolution of landscape painting from the 18th century to the present day. As well as the large oil paintings by artists such as Constable, look at how many artists (including Constable) have used oil sketches made on site as a means of recording the landscape for working up into larger paintings. Watercolour as also been a popular medium for English landscape painting. 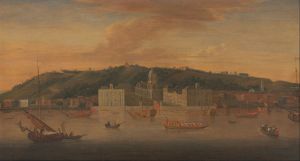 You could see that landscape paintings were going to evolve quite quickly just by looking at the artists in the 18th century. The first early landscape I came across was by Jan Griffier the Elder above from the early 1700s. Here he probably pieced together several sketches to get the panoramic scene above in which he was telling a complete story of what was happening in Greenwhich. Perspective isn’t brilliant and buildings, although stacked with detail lack life. Figures seem to be a key part in bringing early landscapes to life. 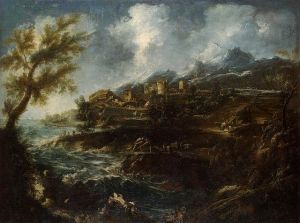 Alessandro Magnasco or il Lissandrino, was an Italian late-Baroque painter and with other painters of this genre that I discovered seemed to add drama to their paintings with figures braving the stormy weather and violent clouds. The figures in his painting also add depth to the painting, painted on platforms in the foreground, middle-ground and background.

Towards the end of the 18th century figures were playing a less important role in landscape paintings. Although the rainbow in Joseph Wright of Derby’s painting above isn’t that lifelike (it may have been at the time) the rest of the painting is almost photo real  due to his use of light that lights up the middle-ground. This depiction of natural light advances towards the end of the 18th century and in to the 19th century.

In The Park at Mortefontaine above by Bibauld, painted in the 1800s he portrays this sunlight perfectly with a clear natural sky, the sunlight reflecting off the trees and the reflection in the water.

It was here when I was investigating landscapes from the 1800s that I started to come across more sketchy paintings.  John Constable’s painting of the East Begholt Church above, is not one of the best examples of his work and his probably a study for one of his larger paintings but it is a great example of en plein air this you can tell by the thick, loose brushstrokes.

These rough and somewhat wild brushstrokes are great for painting outdoor natural objects that don’t require intricate details. In the painting above by German American artist Albert Bierstadt (of the Hudson River School) you can also see that it is en plein air by the roughness off the rocks in the foreground when enlarged. What I would have liked to know here though is which did he paint first? The blue of the background or the rocks in the foreground.

Looking athe paintings of the late 19th century I came across my first impressionist landscape by an artist new to me called Berthe Morisot. Of all the paintings I researched so far it was the first painting that included an industrial landscape with chimney’s blowing smoke in the background. The painting depicts workers at a laundry hanging clothes out to dry. It’s the first, of what I would call, modern landscapes that I came across and it reminded me of LS Lowry’s paintings with the almost stick like figures and the grey-blue paint she uses for the factories and hills in the distance. 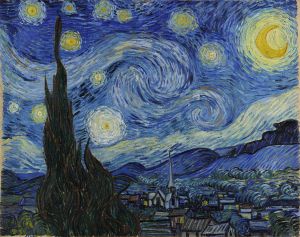 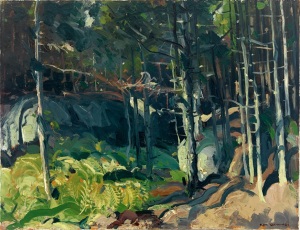 Entering the 20th century I came across this wonderful painting by American realist painter George Bellows in which you can see the individual brushstrokes that make up the bare branches of the tree. During the latter part of the 19th century and the early part of the 20th century artists seem to be doing more and more experimenting and not just concentrating on panoramic views anymore but concentrating on the beauty of smaller sections of the landscape.

Things were also starting to wobble as people discovered more artistic freedom, not just to play around with natural forms but to find more ways of depicting the contrast of natural forms against made objects such as in Anita Clara Rée’s painting above.

American painter and muralist Thomas Hart Benton’s painting  ‘Chilmark Landscape’ above, also seems to have a certain wobbliness about it. However, from what I have seen from his other works, Benton as with Grant Wood seem to notice the natural patterns that occur in nature as well as well as the patterns that man’s impact on nature as created and exploit these in their landscape paintings.

Grant wood along with Thomas Hart Benton was at the forefront of the Regionalist art movement in America. His paintings are notable for the lines of lollipop trees bending around exaggerated rolling hills with swooping roads making his landscapes some of the ‘softest’ ever. Unlike Lowry, who’s colours fade out to depict the distance, Wood keeps the same tones but uses the size of the trees, buildings and hills to depict the distance. This gives his paintings a cartoon feel to them. 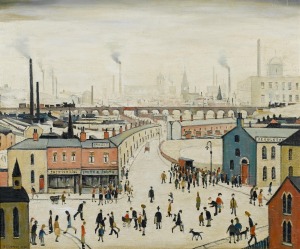 Famous for his industrial landscapes and ‘matchstick men and matchstick cats and dogs’ L.S. lowry will be one artist who will be definitely having an influence on my work through this part of the course. Living in Bangkok, a sprawling metropolis of tall buildings I will hopefully be employing Lowry’s technique of using pale hues to depict buildings in the distance through the gaps in the skyline.

Over the last few years a variety of watercolour painting technique’s have appeared, in the painting Gammelshausen, county Göppinge 1980s,  Margret Hofheinz – Döring has used watercolour as a drawing medium, sketching in much the same way as an illustrator.

Where as  Steve Greaves in his painting above ‘All Saints Church, Darfield’ has used it as both a drawing and a painting medium in a style that has become known as urban art.This style is unlike the paintings of ZL Feng from Shanghai below, where the artist has used watercolour in a more traditional way, although he has exploited the vivid colour of the medium and painted what I can only describe as some of the most beautiful watercolour landscape paintings I have ever seen. 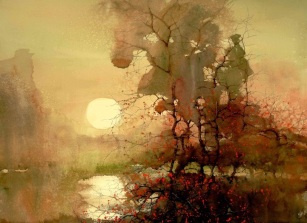