Optical effects have been exploited by many artists to create and depict effects of light. The impressionists, Post-Impressionists and Neo-Impressionists – in particular the Pointillists, Seurat and Signac – made full use of the new understanding of the nature of human perception. Find out what you can about these artists’ aims and study their pictures to see how they achieved effects such as optical mixing. Look at the work of Bridget Riley or the Op artists. Make notes in your learning log.

I began by looking at the impressionists, with Claude Monet one of the best examples of artists who used optical effects to depict light. Looking through his paintings, most of which I knew from my time selling reproduction art but the one that made me stop to enlarge it was.A Woman with a Parasol 1975. The painting is of a Woman with a Parasol like in the painting I looked at in the earlier research point Chevreul’s Colour Theories,  Poppies at Argenteuil, 1873.

Claude Monet Woman with a Parasol 1875

When I first looked at the painting I thought ‘wow he has painted the woman in some detail’ but when I enlarged it I could see that it wasn’t the case. Monet basically modeled the light by painting the sky first then with darker paint he depicted the folds of the woman’s dress, the blue of the sky still showing through portrays the light of the sky reflecting off the material of the dress above the folds. On the right hand side of the woman he uses white and other light colours to show light reflecting off her dress from behind helped by the shadow on the grass slightly to the left in front of her which he paints using darker hues and a greater use of blue than the rest of the grass. I particularly like the way he depicts the glow of the flowers by adding yellow under her arm.

The Pointillism technique developed by Georges Seurat and Paul Signac uses small distinctly coloured dots that are applied in patterns to form an image. This technique relies on the ability of the viewer’s eye and mind to blend the colour spots into a larger range of tones on canvas as to more traditional methods of painting that blend pigments on the palette.

After looking closely at a few paintings Seurat’s and Signac’s I began to examine two paintings that had familiar features, water, reflections and trees. The artists’ aims were clear in both paintings and in their own style using the same technique they both achieved them.

Signac’s painting below seems to use larger clumsier dots to form the painting, this I noticed and most of his other works. Unlike his other paintings The Tugboat Canal in Samois below wasn’t saturated with blue. Although Signac’s placement of dots is quite crude compared to Seurat’s he  carries of certain details in the painting very effectively. In the painting you can see how he has managed to depict the steam by using larger dots maybe pressing on harder to open up the brush, he uses darker hues at the bottom of the trail of steam this makes it look denser while the orange dots at the top of the steam makes it look like it is reflecting the evening sky, I say evening sky because of the orange glow and because the sun looks to be shining through the trees which means it would be low down. To paint the footpath he has used larger dots of a layer of small dots to illustrate how solid it is compared to the larger dots of the water. 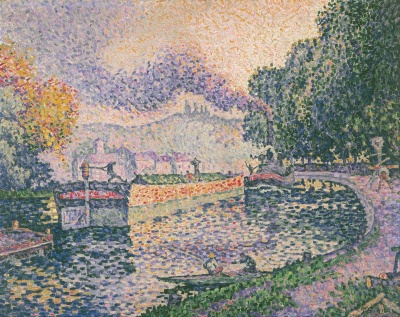 He depicts the reflection of the barge on the water by using similar colours to the boat but using white dots to distort the reflection, which is a very different approach to how Georges Seurat painted the water in The Seine and la Grande Jatte  below. Here Seurat has painted the water by painting in lighter patches among a river of blue to depict either the break from the sail boat or the pull of the current in the water, either way it works well and he hasn’t had to paint a reflection of the boat in the water. In Signac’s paintings as I said earlier he saturates a lot of them with blue to depict shadow or an absence of light, In the painting below you can see that Seurat has done the same under the leaves of the tree in the foreground.

Op art is the kind of art that makes my eyes bleed so I really had to look for works of Bridget Riley’s that weren’t too…effective. 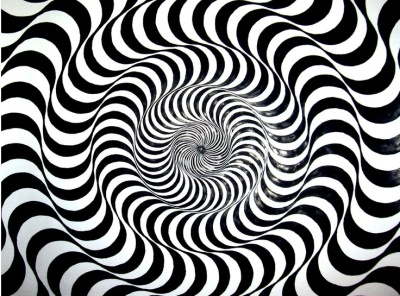 In Bridget Riley’s paintings she depicts irregular three dimensional surfaces as well as movement which she achieves by using warped lines or checks which are thinner or narrower in certain areas to create a sense of depth such as the painting above.

In the painting above she adds a white reflection to the black lines on the right of the image this forces the viewer to see the curves differently from the left. I can only describe it as circles of waves or half tubes which you would walk over to get to the middle, however because of the added reflection it creates an optical illusion of the peak of the wave being up at one side and down at the other.  I can only guess that her work is influenced by one of my favourite artists optical artists M. C. Escher.