For this exercise I prepared two sheets of A3 300 gsm canson watercolour paper, one with an opaque mixture of titanium white and Payne’s Gray to create a light grey colour. The other with a dark wash mixture of Ultramarine and Payne’s gray.

Then I downloaded some clip-art of a winter tree that would help me to develop my own drawing in charcoal in my A4 sketchbook. 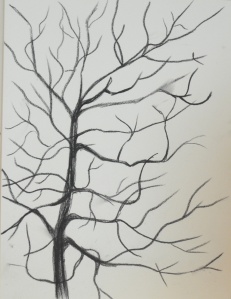 From there I copied the drawing of the winter tree onto the A3 sheet with the light coloured ground blowing away the access charcoal when I had finished. I then made a fresh mix of the the darker mixture of Ultramarine and Payne’s Gray and painted the branches with a fine hog’s bristle brush.

For the finer branches/twigs and for those appearing in the background I diluted the mixture to give me a half tone this created the illusion of being in the distance. 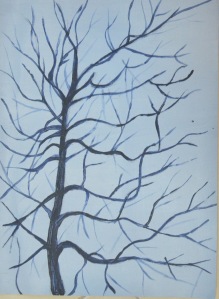 Once I was satisfied with the first painting it was time to start on the second painting, the one I had prepared with the Ultramarine/Payne’s Gray wash.

After I mixed the paint I realised I had forgot to draw in the tree with the charcoal and not having much time before the paint would start to try I decided just to draw in the trunk and the bottom branch and then build the rest up like a jigsaw. I enjoyed doing this in the Negative Space in a plant exercise in the Drawing 1 Course and this time using paint would be a tougher challenge. It didn’t let me down. 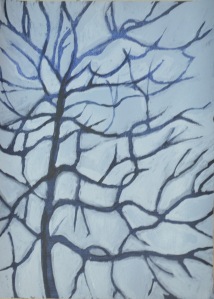 It took more than three times longer to paint the second tree as it did the first, I painted in the main negative shapes as I worked up through the tree on the right hand side reverting to the negative space on the left to help me mark where the next level of branches were.

Painting a simpler tree for this exercise would have probably been better, either that or just painting in the main branches using negative space and then the finer branches with the dark colour in half tone.

The main problem I experienced here was that the branches that were too thin due to making the negative space areas too big had to be widened by going over them again with the dark mixture.

Although the second painting looks very rough, it does look very natural, plus with the light grey paint being thicker or lighter in some areas it gives the impression that in those areas there is more light getting through the branches. This is often the case when you look at a tree and the space between the branches, in some places the sky looks darker due to narrower branches in the distance obstructing the light getting through. Part of the prepared paper was lighter than the rest so I intentionally put the light area at the top of the paper so that the top of the tree would have lighter tones, this paid off as it looks as if more light is getting through at the treetop.

The practice I got from both parts of this exercise will come in handy in the future when painting landscapes but I think I would probably use the two techniques together.